Mariam El-Khatib Reflects on a Year of Palestine Book Club 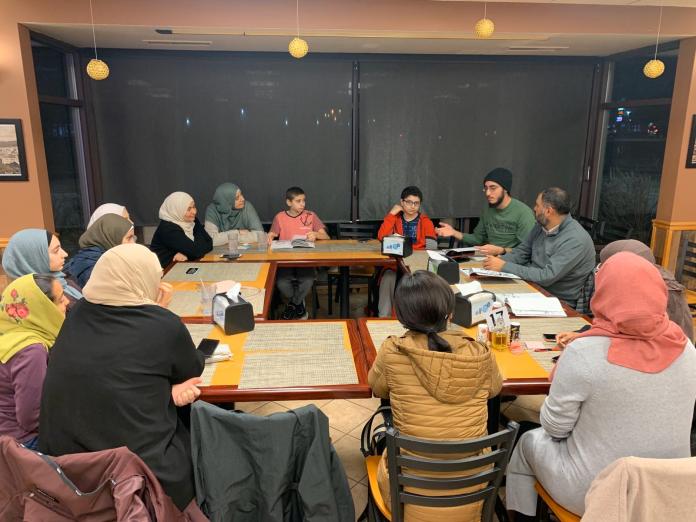 Palestine Book Club started as an idea – what if book club was not just about the book itself, but the whole Palestinian experience? An idea initiated by team member Annis Nusseibeh, Palestine Book Club has become one of the best and most successful AMP-MN chapter programs.

The Palestine Book Club is a monthly gathering of AMP community members to discuss a monthly read related to Palestine. What made Palestine Book Club special was the sense of community it created around the books. For every meeting, usually hosted at a local Palestinian business, there was Palestinian dessert served with tea. The flavors of sweet syrup and mint tea iconic of any Palestinian gathering serving as a backdrop to the discussion.  At every meeting, the discussions went well beyond the book and into the lived experiences of Palestinians as participants took turns telling their own personal stories and reflections. Attendees ranged in ages from 8 years old to 50+;  those who have lived in Palestine and those who have never stepped foot.

Mariam El-Khatib shares one of her favorite memories from the book club meetings: “We were gathered at one of the meetings discussing Joe Sacco’s graphic novel, Palestine, which was set during the first intifada. A 3amo (uncle) from the local community walked in and with all honesty admitted he had not read a single page in the book. It turns out though, that the 3amo (uncle) had lived through the 1st intifada and ended up captivating the entire audience with his personal account of the events as they related to the book we had all just read.”

Since launching in September of 2019, the group has read and discussed 12 books. They’ve read everything from Susan Abulhawa’s Mornings in Jenin to Angela Davis’s Freedom is a Constant Struggle. They’ve covered various genres and authors, even expanding to the Autobiography of Malcolm X with a discussion on the lessons we can learn from a life that was dedicated to a cause. Another highlight of the program was the attendance of a Nakba survivor in the meeting during the discussion of Ilan Pappe’s The Ethnic Cleansing of Palesitne.

Mariam El-Khatib is a leader of the Minnesota chapter of American Muslims for Palestine, has spoken at national conferences, is known for her expertise in fundraising, and has written for Medium. You can find her on Twitter.