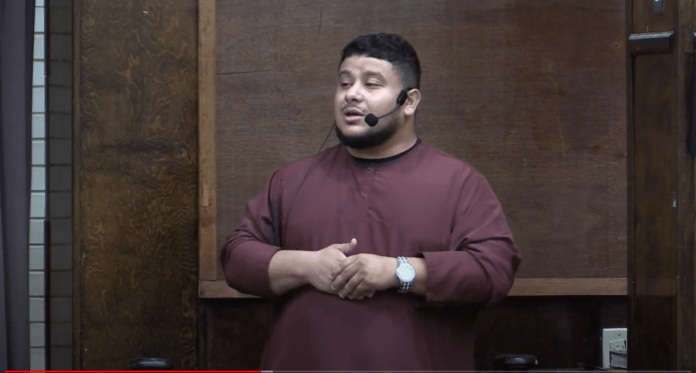 In September, the Dar al-Hijrah Islamic Center of Virginia hosted Mohamad Habehh, a renowned activist, for a Friday khutba on the topic of community building and learning from the examples of leaders and community members in the Quran. Hafidh Mohamad Habehh gave a sermon exploring the story of Talut and Jalut – and how with trust in God and a steadfast commitment to the Truth, justice will always await the oppressed.

Mohamad Habehh spoke at length on the oppression faced by a community mentioned in the Quran by the tyrant Jalut. The people of Talut asked Allah for a prophet, and when Talut was revealed as their prophet, the people rejected him because he did not originate from Bani Israel, nor did he possess the high social ranking of the elite. He expresses, though, that Allah selected him to demonstrate that Allah is He who elevates, not subjective societal standards and judgement.

Despite Talut’s lack of power, popularity, and support, Talut gained a tremendous victory over the tyrant Jalut, and the ayah “and how many times has a smaller group overcome a larger group by the will of Allah” symbolizes the victory and justice awaiting oppressed communities. He emphasizes that in order to achieve justice, both community leaders and members must practice discipline, courage, and faith in Allah. Habehh provides a number of calls to action that attendees can start to explore on their own to pursue justice in their life and to serve their community – and to ensure that every individual does their part for the greater cause of justice. Mohamad Habehh is a seasoned activist who has been featured on numerous talk shows for his work on Palestine and spoken at national conferences.