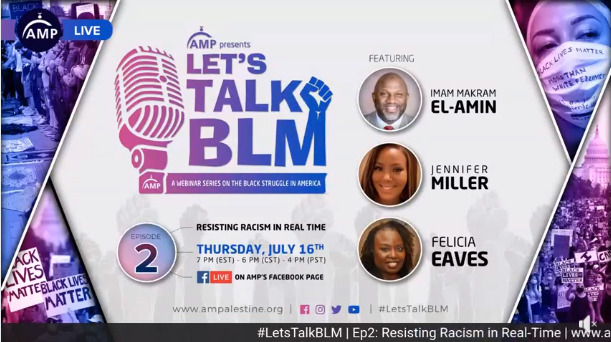 Earlier this summer, American Muslims for Palestine launched a new webinar series titled #LetsTalkBLM, that features Black scholars, activists, and gamechangers of all backgrounds to discuss Black liberation and resistance. Episode two was on “Resisting Racism in Real Time”, and was hosted by Taher Herzallah, the Director of Outreach for American Muslims for Palestine.

An episode in July featured three outstanding community leaders, the first being Imam Makram el-Amin. Imam Makram is the Imam of Masjid Anuur in Minneapolis and the head of al-Maa’un Neighborly Needs Community Outreach Services.

The second featured speaker was Jennifer Miller, the co-chair of the Dallas Alliance Against Racist and Political Repression. Last year, she was recognized for calling on John Creuzot to reopen the criminal case against three police officers who killed Tony Timpa when he called 911 for help.

The third featured speaker was Felicia Eaves, a DC-based lifelong advocate on various social, political, and humanitarian issues. Eaves currently works as a consultant for organizational and public policy strategy.

This episode was insightful and recognized the historic, current, and growing Black and Palestinian solidarity movement. Taher Herzallah is a leader in the advocacy world for Palestine, and has been featured a featured speaker with FOSNA, and writer on al-Jazeera, the Electronic Intifada, and Islamicity.