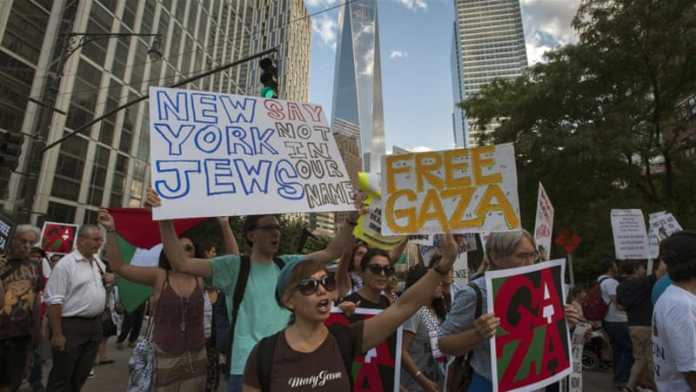 American Muslims for Palestine has regularly collaborated with Jewish Voice for Peace in a number of initiatives. In 2017, Taher Herzallah, the Associate Director of Outreach & Grassroots Organizing with the American Muslims for Palestine, wrote an article in Al-Jazeera titled “In the US, we need a Muslim-Jewish alliance.” In this article, Herzallah discusses the need for interfaith collaboration on a number of social justice issues, one of which is the global Palestinian solidarity movement. He writes that the election of Donald Trump has reinstated an interest across the country in Muslim-Jewish partnership. “…The emboldening of white supremacist groups bent on causing physical harm to both Muslims are Jews, [creates] an urgent sense that we all need to come together to weather this fascist storm.” He explores how Trump’s racist rhetoric has emboldened anti-Semitism and Islamophobia alike.

He warns against counter-intuitive partnerships with organizations like the Anti-Defamation League and American Jewish Committee, which have been complicit in creating the climate of Islamophobia they “claim to abhor.”

He previously served as a community organizer with the American Civil Liberties Union of Southern California. His campus activism has attracted the attention of Electronic Intifada and other platforms, has published on platforms like the Orange County Register and Al Jazeera English, and has been featured in live interviews on Al Jazeera Arabic. He has authored a guide for student activists titled “Everybody Freeze.”

Herzallah advises organizers to continue collaborating and building connections with organizations like FOSNA and Jewish Voice for Peace, who as a campus organizer himself has “worked for years to build accountable partnerships between Muslims and Jews, founded on principles of justice, solidarity, and love.” He demonstrated this example in 2014 as a student organizer, who collaborated with Jewish Voice for Peace on a program related to countering bigotry like Islamophobia and anti-semitism with Estee Chandler of JVP. American Muslims for Palestine have also worked with IfNotNow, an American Jewish progressive activist group opposing the Israeli occupation of the West Bank and Gaza Strip.

Herzallah ends with a call to Muslims and Jews to come together and combat Islamophobia and anti-Semitism, as both Muslims and Jewish people are targets of the white supremacist alt-right movement. Meaningful Muslim-Jewish alliances can be, and are key to expanding the movement for equality and justice in the United States and worldwide.